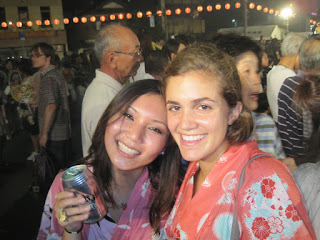 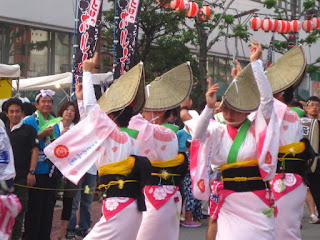 Last week was the Nagoshi Matsuri (End of Summer Festival) in Omura. It is a three day festival that started out Sunday with an amazing display of fireworks, shot from the airport. Some friends and I sat by the water and watched. I had been in Nagasaki the night before and saw the closing fireworks for their festival, however, those were not as spectacular despite being a much bigger city than Omura. Omura's lasted for half an hour and were huge and might have been the best I'd ever seen.

The next day of the festival I met up with some friends and we just walked the main street and got food at several of the food vendors. The main drag was filled with little stands selling yakitori (grilled meet), okonmiyaki, shave ice, roasted corn, grilled octopus and more. The stands are mostly set up by local restaurants, so I got the name of some delicious places that I'll have to try later. We also watched some taiko drum performances. An ALT that is leaving performed with her taiko group on the main stage. It was fun walking with other ALTs because their students would nervously approach them and say hi and try to speak in English.

On the final day of the festival my friend I dressed in our yukata (summer kimono). I'd say more than half of the girls and young women wear yukata at summer fesitvals. My friend and I both noticed a difference in how the local people reacted to us when we had the yukata on. They seemed to be more accepting of us, seeing that we were making an effort to be a part of the culture, but man was it hot! This night there was dancing down the main street, as well as some on the main stage. So many of the townspeople participated. It was quite an experience and I'm already excited for next year!
at 12:25 PM